The legend of the Benevento walnut

Home » The legend of the Benevento walnut 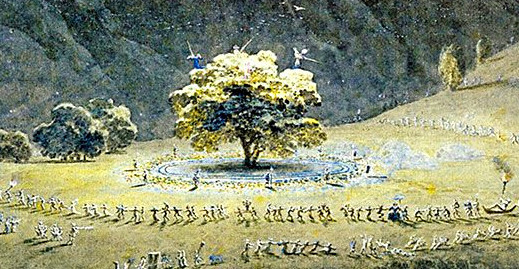 Long ago, it was said that on the night of San Giovanni, witches flew in the sky by the thousands, on their way to the great Sabbath held at the walnut tree in Benevento…

In the 7th century, the Lombard people who lived in Benevento used to celebrate scary pagan rites under that very walnut tree.

The bishop, who did not approve of these practices, used the pretext of protecting the Lombard people from the imminent invasion of the Byzantine army, to rip out the walnut tree, promising them that the invaders would flee if they renounced their pagan practices.

And so it was: the tree was pulled up and the Byzantine army left the city.

After the old tree was pulled up, however, another walnut tree appeared in exactly the same spot and the demonic gatherings were revived. It was in that period that the rumour spread that witches from all over the world gathered there on the night of San Giovanni.

Later on, in the 12th century, this tree also died but the rumours about the witches’ gatherings (known as janare in the dialect of the Campania region) under the walnut tree in Benevento were firmly root in popular myths.

The belief that witches liked congregating around the walnut tree for their Sabbaths was widespread throughout Italy: in Rome, legend has it that the church of Santa Maria del Popolo was built on the site of a walnut tree around which thousands of devils danced in the middle of the night.

Even in Bologna and Pescia in Tuscany, popular sayings claimed that witches used to confabulate or sleep under the walnut trees.

The Benevento walnut tree became the witch tree par excellence since it was located near the river Sabato (originally Sabatus). The association of Sabbath with witches sprang up spontaneously from the name of this river.

This correlation between the walnut tree and the “infernal” world has, over time, evoked a foreboding symbolism which then found its way into several superstitions. In some parts of the countryside, it is still said that you should not sleep in the shade of a walnut tree because you may well wake up with a terrible headache or a fever. Another popular belief maintains that if the roots of the walnut tree get into the barn, they will make all the cattle get sick.

This last saying is not without foundation: the roots of the walnut tree contain juglandin, a toxic substance for other plants, which often die. Consequently, it is not unusual to see walnut trees growing completely on their own in nature.

Science or magic? Who knows?

In the photo: The walnut tree in Benevento, by Giuseppe Pietro Bagetti