Home » Our farm » The region 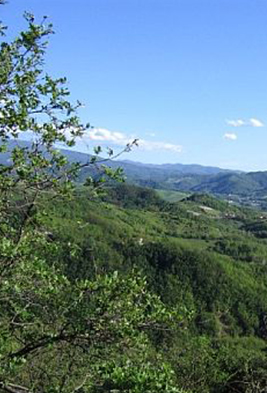 The Cascina Marlenzone estate in Pontecurone stands at the heart of the region which stretches from the Po Plain and the Ligurian Apennines to the edge of the Oltrepò Pavese: in the Tortona region, gentle hills covered with woodland and vines alternate with the typical landscape of the plain which descends towards the banks of the Po, cultivated fields give way to rows of trees, which flow like waves towards the Apennines, welcoming travellers into this rich and thriving countryside.

A rural setting which also has its fair share of modern, industrial and agricultural influences – a key intersection on the border of three regions: Piedmont, Lombardy and most importantly Liguria, to which this territory is historically linked. The Oltrepò Pavese, which stretches right to our estate, is sure to delight both visitors and their palates: delicious typical local produce, outstanding cuisine and a very special welcome make this the ideal spot for a long holiday discovering spectacular sights.

The commune of Pontecurone is located in the region known as the “Colli Tortonesi” (Tortona Hills), which is also a designation of origin which identifies the fine wines of Eastern Piedmont.
Located on a handy crossroads, at an ancient trade and commerce hub, the region is known for its innate passion for fine cuisine, and is recognised and valued for its unique food and wine. A land of borders, influenced by nearby Lombardy and Liguria, with a wealth of art and culture to offer within just a few kilometres: Tortona, for example, is a town which dates back to the Roman era; Castellania was the birthplace of Fausto Coppi, and is home to a mausoleum in memory of the champion, along with his house – now converted into a museum dedicated to the cyclist’s achievements. Volpedo was the home of Giuseppe Pelizza, one of the most important Verismo painters, whose home and studio is now open to visitors.
Luigi Orione was born in Pontecurone in 1872, the priest proclaimed a saint in 2004 by Pope John Paul II. Orione is an important figure in the Catholic world: he was esteemed by believers and the high ecclesiastical hierarchy for the ecumenical work he did throughout his life.
Moved by a great love for the Church and a passion for the conquest of the souls, he became actively interested in the emerging problems of the time, such as the freedom and unity of the Church and the Christianization of the masses, rushing to the aid of those exhausted by war and hunger, across national borders to Latin America.
Beloved by many believers for his great commitment to his community over the years, Don Orione was considered responsible for the miracle of 21 June 1944. That day, during bombing in the fields surrounding the bridge over the Curone, the dropping of numerous bombs by German anti-aircraft artillery remarkably resulted in no victims. This extraordinary fortune was attributed to the Saint, who had worked in the region for many years, and whose mortal remains have been stored in the crypt in the Madonna della Guardia shrine in Tortona since 1942.

Tortona, formerly Derthona, the origins of which can be traced to Roman times, was most prosperous during the era of Communes when it was the nerve centre of extensive commercial activity. The commune was controlled by Milan during the time of Gian Galeazzo Visconti, and in the 1700s it was a Savoy military stronghold.
Despite its modern appearance, which can be attributed to the town’s thriving industry, Tortona boasts valuable artistic heritage, such as the cathedral, for example, built in the XVI century, and the Santa Maria del Canale church, which dates back to 1100. The surrounding area also has much to offer: the hills around Castellania, beloved by Fausto and Serse Coppi; San Sebastiano, Volpedo and the Curone Valley, with its agritourism and food and wine routes, nationally renowned for its fruit and truffles, celebrated in a number of different events.

The Oltrepò is a region of hills and vines, gentle slopes climbing upwards towards the Apennines, fronted with deep valleys in which ancient rivers wind. The landscape, industrious and well-maintained countryside, is reminiscent – with its many castles that still today stand proudly on the hilltops – of the feudal history of the place.
Exploring the Oltrepò means getting lost among intricate streets and tiny hamlets, where the air is scented with wine, stopping off in cosy osterias or touring one of the many wine cellars which have brought fortune to the region.
A visit to the Oltrepò means abandoning yourself to the pleasure of the hot springs, at the Salice Terme and Rivanazzano spa centres, where visitors have been enjoying the thermal waters and the magic of the place since Roman times, along with the temperate climate which allows for mild winters and fresh summers. Upon arriving at the Oltrepò plain, you cannot fail to be seduced by the beauty of the place, which changes with the seasons, in colour and appearance: bare in winter, the green of spring is an exhortation to return in the throes of summer, when the purple grapes colour the vines and the many mingling fragrances of autumn start to fill the air. Simply choose your destination: the hamlet of Varzi, Zavattarello Castle, Sant’Alberto Abbey; or what about Fortunago, Casteggio or nearby Voghera?