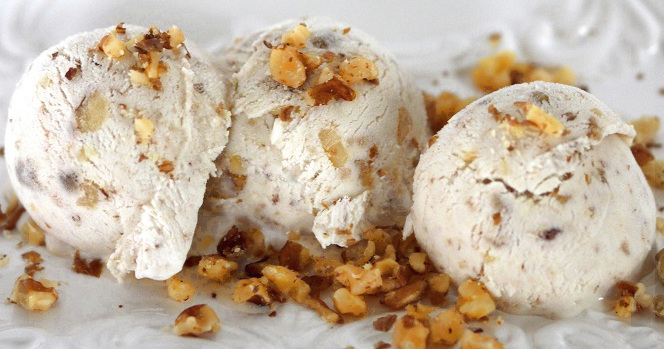 Walnut ice cream is perfect as a cool, summer snack or as a base for a semifreddo

and it can be prepared with an ice cream maker or a basic electric mixer.

INSTRUCTIONS WITH THE ICE CREAM MAKER

Coarsely chop the walnuts and whisk into the milk.

In a bowl, beat the egg yolk with the sugar, then add the whisked walnuts, the rum and the cream.

Pour the mix into the ice cream maker and follow the instructions in the manual for ice cream, then place into a container in the freezer for at least 10 hours.

INSTRUCTIONS WITHOUT AN ICE CREAM MAKER

Before starting, place the cream, the bowl and the mixer’s whisks into the refrigerator for at least half an hour to cool them well. In the meantime, coarsely chop the walnuts and whisk them with the milk.

Pour the cold cream into the bowl and, with the mixer on whisk, whisk the cream.

In a bowl, beat the egg yolk with the sugar, the whisked walnuts, the rum and the whisked cream.

Pour the mix into a container and leave in the freezer for at least 10 hours before serving.